If there’s one thing that is absolutely indispensable to a trader, it is a stock chart. Stocks are vital. While it’s possible to trade without ever looking at a stock chart – I’m sure some grizzled veterans from yesteryear can do it – trading is faster, easier, and more successful with charts by your side.

The best charts are far more than just plots with prices and volumes, too. You can tell a lot by looking at the patterns inherent in a chart- if you know what to look for and how to make use of the information. What shape is the price when graphed on a chart over a certain period of time? What is indicated by this pattern? What insight can you gain from seeing these patterns appear in data in real time?

In this article, I will cover the basic stock chart patterns that traders use today when conducting technical analysis and what they mean. 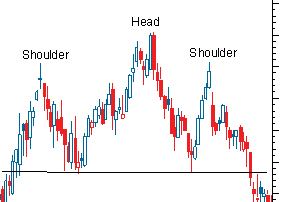 The Head and Shoulders pattern is probably the classic, definitive stock chart pattern. The pattern is marked by the stock’s price rising and peaking (the first shoulder), then falling, then risking again and surpassing the previous peak to reach a new peak (the head) before falling, then rising once more and peaking a third time (the second shoulder).

When this happens, you can generally expect the price to continue to decline. Note that Head and Shoulders is a trend reversal tool; that is, you can use it to track and measure when a stock’s price is going up before it goes down and declines. Also note that this pattern, like many others, is more used over weeks and months instead of days.

You can also have a H&S formation that is flipped upside –down and reveals the opposite. 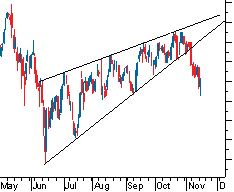 A Wedge, then, is formed by the support and resistance lines as they move toward each other. Like H&S, Wedge patterns are trend reversal tools. A rising wedge is a sign that the price of a stock is likely to fall and is identified by the gap between the support and resistance lines closing over time; a falling wedge indicates the opposite, or that a stock’s price could rise. It is identified by the gap between the two lines increasing over time. Wedge patterns are best used over months instead of days or weeks.

Also, Double Top is a reversal trend like the ones above that can indicate a stock’s move toward a downward trend.

The Double Bottom pattern is virtually the opposite of the Double Top in that it indicates potential for an upward trend in the stock’s price. With both of these patterns, the volume (or amount of shares bought and sold at any given time) is important. If the tops and bottoms are formed with higher volume than normal, you can be more confident that they really do form resistance and support lines, respectively.

The Pennant pattern is a continuation indicator, or one that suggests a stock’s price will continue on the same path as it was before. It’s called this because it is shaped like a pennant, which looks like a triangle.

The typical way a pennant is formed is when a stock’s price shoots upward and makes a major move, accompanied by lots of volume. This steep upward movement is called the flagpole. The tip, or peak, is the resistance line; the very beginning of the first upward movement is the support line. The pennant shape is formed when the support and resistance lines start converging towards each other over time. You usually see trading volume drop gradually as this happens.

When the two lines meet, or come close to it, you see higher trading volume before the stock moves up again dramatically. That completes the Pennant pattern.

There are other stock patterns out there, some that are more advanced and complicated, but the above patterns are some of the most basic that can give you good indicators of what a stock’s price will do in the near term.