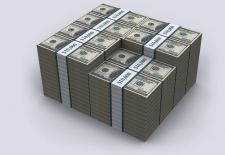 If you had a million dollars to invest, how would you do it?

As this is a large amount for an individual, in most instances it’s advisable to invest conservatively. There are many options, and it does depend on what your goals are. You could invest to grow your retirement fund, build up a sizable nest egg, and possibly live off the principal.Here, I’ll talk about the various options you have at your disposal for investing a million dollars, and give you an idea of the rates of return you can expect. Note that a diversified approach is always recommended, so choosing more than one option is generally a good choice.

Stocks, by far, offer the best rates of return for people wanting to make the most of their one million dollars, but they are riskier by nature than any of the other securities I will discuss.

This risk can be reduced by investing in large companies that have been a round for a long time, with stable profits. These are commonly referred to as Blue Chip Companies. Smaller, newer companies are generally considerably riskier.

Mutual funds are less risky but offer less of a return (although you can still typically get more than you can with bonds).

Rates of return for stocks vary. It really depends on your investment strategy and how the market fares. Historically, though, the annualized return – the amount of money you actually receive per year, instead of the inaccurate “averaged return” many investors use – for the market has been 6-7% over its duration, when adjusted for inflation.

If you feel stock investing may be for you these articles may be of interest to you:

What are Stocks and Shares?

How Do I Start Trading Stocks?

What is the Difference Between Common and Preferred Stock?

What are Blue Chip Stocks?

What Are Growth Stocks?

How Do Mutual Funds Work?

or for more stock trading articles, visit our Education section.

Putting It Away: One Million Into Savings

The first thought for most people is to save the money and collect interest on it. Interest on a savings account may be small, sure, but it’s all relative; the same interest rate on $1,000 doesn’t go nearly as far as the interest received from $1,000,000.

Let’s say you want to take a relatively safe route and put your million bucks in a savings account and collect interest on the principal. How much could you make? The bad news is that savings accounts simply do not generate a lot of income on an annual basis. They are quite safer than stocks, but in exchange for this safety, you give up a lot of return. Plus, savings accounts are only insured up to $250,000 per depositor by the Federal Deposit Insurance Corporation (FDIC) per bank. You’d have to split your sum up and deposit it with several banks.

Savings give you better access to your money, but don’t come close to giving you the best return.

A certificate of deposit is a financial product that basically gives you a guaranteed rate of return after a certain period of time has elapsed. These are insured by the FDIC and are very similar to savings accounts. The downside is that you can’t withdraw money from a CD as easily as you can a savings account, but you can get a higher rate of return.

CDs are typically classified by their length. Generally, the longer the length of the term, the higher rate of a return you’ll receive. A jumbo 1-year CD, for example, may have a rate of return of 1% to 1.15%. A 5-year CD may have a return of 1.5% to 1.75%, compounded daily or quarterly. If you were to open up a 5-year jumbo CD at 1.75% compounded daily, you would have $1,091,439.98. That is almost what you would have after having the million in a savings account for 10 years at a lower rate.

CDs are desirable because they are safe and liquid. But, they may not give you the right kind of return that you want. After all, even in the scenario above, you’d only generate, on average, $18,287.80 per year.

The next choice people consider in this situation is a government bond. The safest investment in the world is a U.S. Treasury Security, or Treasurys. This is a loan given to the U.S. government in exchange for a guaranteed rate of return at maturity. This is very stable and as risk-free as you can get, but the rate of return you’ll receive is smaller than with other securities.

There are three types of Treasurys. The first is a T-Bill, which matures in one year or less. The second is a Treasury Note or T-Note, which matures in 2-10 years. The third is a Treasury Bond, or T-Bond. These have the longest maturities – 20-30 years – and can generate the highest rates of return. Some have coupon payments, or payments made to the owner during the length of the loan before maturity.

We’ll first look at the highest rate of return – the 30-year T-bond with 3% coupon rate – to give you an idea of how much you can make with this option. For starters, a 3% coupon rate means you will be paid 3% per bond per year. A bond with a face value of $1,000 would generate $30 a year in payments for the length of the term, which would ultimately be $900 per bond, plus the yield.

As with anything else, it’s best to diversify. Split the sum amongst Treasurys, municipal bonds (which are similar to Treasurys in performance and yield), stocks, and mutual funds. Spread your stocks and mutual funds across sectors and industries, and include a portion of index funds to reflect the market as a whole. Hedge with inverse mutual funds that mitigate your losses if the market takes a downswing if you want to reduce your exposure to risk.

You could also consider investing in hedge funds, which are professionally managed by hedge fund managers to earn a profit no matter how the market performs. These can generate high rates of returns, but there are two concerns: they charge management fees that can be considerably high; and they are difficult to judge in terms of performance. Still, they are an option; the average hedge fund return in 2008, a very difficult year for the market, was -18.65% compared to -37% for the S&P 500.

You can also look at commodities and foreign currency for investment opportunities, but note that these can be volatile and prone to speculation and macroeconomic movements from foreign governments and central banks.

If you have one million dollars to invest, you already have a substantial amount of capital. The safest route is to grow your money gradually with a nice, balanced investment approach – which, ironically, is the same recommendation whether you have a million, ten million, or ten thousand sitting in your account!