If you had to name one, single factor that most impacts the stock market on a regular basis, it’s the economy.

Of course, saying “the economy” is kind of like saying “Humanity is the source of the world’s problems”. While true, it doesn’t really shine much light on the cause-and-effect relationship between the market and the economy.

The truth is, the stock market is impacted by the economy in a variety of major ways. One job of a successful trader is to understand the relationship between the markets and the economy, understand the economic tidal forces in play, and determine how various news,events, and other developments will impact a stock portfolio.

Here, we’ll discuss the myriad of ways the economy can impact the stock market, for better or for worse.

A Strong Economy: Or, a Rising Tide Lifts All Boats

It’s clear to any trader that when the economy is doing well – i.e. when gross domestic product is expanding, imports are strong, unemployment is down, inflation is stable, trade deficits are stable or shrinking, consumer sentiment is positive, and government debt is manageable – stocks do well. 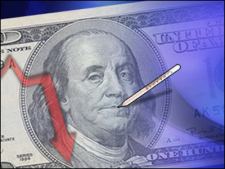 This is akin to the old saying, “A rising tide lifts all boats”. So, when the economy is strong, it’s more likely that we’ll see a bull market, or, a market marked by rising stock prices and general optimism.

When the economy is recovering or is strong, companies are producing and pulling in higher profits, employment is low, and demand for products and services is higher. It’s cyclic; because more people are employed, they have more money to purchase goods and services from businesses, which in turn means these businesses have to keep more people employed to meet the increased demand.

When this happens, you can expect stocks to rise because companies are reporting higher earnings each quarter and have promising, long-range plans – assuming, of course, that the company has strong financials and isn’t over-laden with debt.

Also, during these times, if interest rates remain stable then business will continue to thrive (generally speaking) because higher interest rates mean it’s more expensive to borrow money, which eventually impacts how much consumers have to spend.

Consumer spending is the single largest driver of the economy, so as long as they have ample access to cash or credit, the economic engine – and the stock market – will continue to grow.

A Weak Economy: Or, A Falling Tide Leaves Everyone Stranded

If a rising tide lifts all boats, a falling one leaves every boat stuck in the mud. That’s the impact a weak and falling economy has on the market. Remember, an economy’s GDP consists of, among other things, private consumption (or consumer spending) and gross investment (what companies buy with their capital, what they have in inventory, etc). The trade deficit, or exports minus imports, also plays a role.

So, if consumers are spending less because inflation is rising and their buying power is decreasing, or because unemployment is rising, then the stock market will reflect that, generally.

Again, it’s cyclical; consumers have less to spend, so they buy fewer goods and services, which means companies produce less revenue and have to sometimes lay off employees – which means fewer people have money to spend.

This is compounded by what the foreign market is doing. If we are importing more than we’re exporting, by a considerable margin, that means demand for our goods and services produced domestically is not sufficient to meet a critical part of overall demand (foreign demand). So, we have to rely more on domestic demand, and in a weak or falling economy, that is unstable.

When the economy is suffering, i.e. when unemployment is up, inflation (or deflation) is rising, GDP is contracting, and consumer sentiment is negative or falling, the stock market generally will reflect this.

Companies will report smaller earnings, which will drive down the price of their stock. Plus, since fewer people will have money to invest – or fewer investors will want to expose themselves to risk in the market and are turning instead to gold or foreign currencies as safe havens – there will be less demand for stocks.

Of course, the economy can be perfectly fine and the market can still take a hit. The crash of 1987, in which the Dow Jones fell 22.61% in a single day, is a good example. There wasn’t a clear-cut economic weakness that caused this crash; it was instead caused by anything from the way stocks were traded to monetary policy disputes in the international arena or simple market psychology.

Also, individual sectors in an economy can be affected while the rest of the market performs well. Manufacturing in the United States has been in a decline since the 1970’s, yet the market since then has grown exponentially.

On any given trading day, you can see certain sectors outperform others, and sometimes these are due to prolonged trends and underlying economic weaknesses in those sectors. For manufacturing, the rise of globalization meant that companies could gain more by having their goods manufactured overseas for less money, which resulted in plant closings and layoffs over the past thirty years.

Sometimes, the market can actually drive poor performance in the economy. In 2001, the dot-com bubble popped, and the failure of many Internet-based tech companies virtually all at once sent the U.S. into a recession.

The relationships between the market and the economy are numerous and complex, and any single analysis of the dynamic between the two probably isn’t sufficient. But, it is clear that when one is doing well, most of the time the other is doing well, too. Still, conduct your research thoroughly and make sure that above all else, the companies in your portfolio are strong, no matter what the economy does.