I’ll be honest – in the back of virtually every trader’s head, at some point during their career, this question is asked.

The short, simple answer is “No”, unless one of two conditions are met:

It’s never as simple as a yes or no, though, which is why I’m going to give you an insight into when you should make mass sell-offs and what indicators are in the market today that such drastic action (and it is a drastic action) is warranted.

The Problem of Under-Diversification

First, though, I’ll explain one of the most common reasons why people become scared and start thinking about getting rid of their portfolio (the stock portion, at least) in one fell swoop. 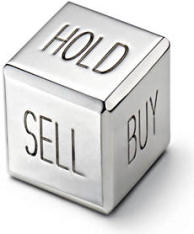 Diversification is when you have broad exposure across large swathes of the market, versus having most – if not all – of your investment capital tied up into one or two stocks, or one or two industries.

The reason behind being diversified is simple. Stocks under-perform. The same goes for sectors and industries. They fall in value every day. It’s almost impossible to reliably predict what stocks – or industries, or sectors – will sink into the red or rise into the black on a daily basis.

For this reason, having broad exposure is recommended because even if a few of your sectors are hit on a particular trading day, it is likely that you will have gains in the other sectors to offset your losses and potentially even turn a profit. After all, you can’t make it in the stock market by expecting to win with every trade. Losses will happen, and diversification makes it so the only major losses you’ll probably experience are broad downswings in the market that impact everyone.

You can’t predict those nor can you guard against them, but with diversification, you can limit your risk to everything else. It’s all about guarding against non-systemic risk (i.e. risk that doesn’t impact the market as a whole).

If you are under-diversified, it may be prudent to sell your positions and use the proceeds to take up a more diversified approach. You could do this without selling everything, but chances are, you arrived at your current positions without a clear-cut strategy. It is preferable to start fresh with a new strategy.

What If Your Positions Are Getting Shelled?

This is another common reason that people vacate their positions – but unlike the one described above, this could be a bad reason. It really depends on your overall trading philosophy and the timespan over which you are sustaining losses.

If you are getting hit in a single day across your positions, you are either the victim of a broad market downturn, or really, really unlucky. Either way, if you thought it was a sound investment before, you’ll probably think it’s a sound investment after – assuming you’re properly diversified.

If you are sustaining losses over a prolonged period of time, though, it gets a bit trickier. One school of thought is this: If you have stocks that aren’t overvalued when you buy them, downturns in their value give you an opportunity to purchase more stock at a cheaper price. This is the basis of dollar cost averaging, which basically means you are lowering the total average cost per share of your stock investment. (This is also a reason to not buy stocks that are overvalued; if the fall, it is very likely that it is a normal market correction, and values probably won’t rise again to the previous high for some time.)

Unless you just happened to pick a portfolio full of companies with poor foundations, your portfolio will likely recover. Many sound investors who held onto their shares when the market crashed in 2008 and continued to leverage their investments not only cut their losses in the long run, but actually turned a profit.

On the other hand, if you have set a maximum loss threshold – say, 2% of your capital – then a disciplined approach means sticking to that threshold and getting out. Still, consider the fact that a diversified portfolio often does not sustain severe, prolonged, and widespread losses.

What If The Market Is Doomed?

Depending on your perspective (and who you listen to), you may come to believe that the stock market is headed for disaster. I wouldn’t say the market is headed that way, but some experts might – in every market, there’s at least a couple who preach doom and gloom.

In this case, evacuating your positions and trading stocks for gold or some other safe haven could be a viable strategy. Keep in mind, though, that stock market crashes like the one witnessed in 2008 are uncommon, if not rare.

Still, if you think the market is going nowhere but down, then you may have a case for selling your shares and buying assets that can withstand the economic shock. I don’t think that is in the cards for this market right now, but if you believe otherwise, you have options.