Stock market regulation isn’t the sexiest topic in the world when it comes to investing in stocks and playing in the market.

It is, however, something that is quite necessary. The stock market, if left unchecked and uncontrolled, would descend into chaos and 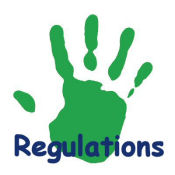 a widespread culture of cheating, manipulation, deception, and – in the end –financial disaster.

(At least, that’s what regulators want you to think.)

In all seriousness, there are many good reasons why the market is regulated. One of the main benefits is a controlled environment in which you can trade without having to worry about unfair practices like insider trading and the like. Not to say it doesn’t happen anyway, but the effect is significantly less.

Here, I’ll cover what stock market regulation is, how it works, and how, exactly, is in charge of monitoring the market.

Who Is In Charge of Market Regulation?

The government agency tasked with overseeing and enforcing regulation in securities markets varies from country to country. In the United States, the preeminent government body is the Securities and Exchange Commission (SEC). The SEC was created in 1934 and currently employs over 3,700 employees. Its primary mission is to monitor and enforce laws created to govern the existence of securities and other related assets in the United States. It licenses every exchange in the U.S., from main exchanges like the New York Stock Exchange and NASDAQ to the Chicago Stock Exchange, National Stock Exchange, and other minor markets.

The SEC also enforces legislation created by Congress to control securities trading. It performs this action by investigating alleged incidences of crimes associated with the trade of securities in the U.S., including but definitely not limited to:

Additionally, the SEC oversees the publishing of mandatory financial disclosures from corporations on the floor. These disclosures are designed to give investors, regulators, and the public at large all the necessary information they need to make fair and informed trades. Each company that is listed publicly, for example, is required to submit a Form 10-K, which is a comprehensive report of the company’s overall financial health – including risk factors, earnings information, existing liabilities, executive compensation, and the MD&A, or management’s discussion & analysis.

Regulation of Brokerages, Treasuries, and More

The SEC has jurisdiction over stocks and all publicly-traded companies, but that is only one part of the overall market. The other part – stock brokers and investment firms – are regulated by the Financial Industry Regulatory Authority (FINRA). FINRA regulates trading, controls licenses, informs investors, and supervises compliance from investment firms that fall under its purview. This is to ensure that investors deal with licensed professionals who abide by the rules and legislation that are there for the smooth operation of the market.

You also have other asset classes that are regulated by various other bodies, including commodities, futures, and the like. One popular asset class – U.S. Treasurys – is monitored by the Bureau of the Public Debt, a body within the Treasury Department. The BPD, along with the SEC, regulates trading of Treasury bills, notes, and bonds, which are involved in countless retirement plans, investment accounts, and diversified portfolios not only in the United States but abroad.

One notable, high-profile example came in 2004, when Martha Stewart was sentenced to a five-month prison term in federal prison for conspiracy, making false statements, and obstruction of justice stemming from a case that looked suspiciously like insider trading (even though she avoided being convicted on that particular charge). Stewart ran afoul of the SEC when her broker at Merrill Lynch gave her nonpublic information about a stock that subsequently cratered in the stock market – although Stewart, because of the timely information, avoided $48,000 in losses.

The SEC also managed to fine Goldman Sachs $550 million in 2010 for misleading investors, and AIG $800 million in 2006 for improper accounting and other offenses.

The SEC failed to provide any meaningful oversight for any activities that led to the financial collapse of 2008, and to this day has not issued any major, sweeping charges against any firm, company, or individual associated with the collapse, much to the chagrin of the agency’s critics. Still, the presence of the SEC and laws governing stock market trading manage to provide for a relatively-smooth trading experience – one that allows for average investors to trade without having to worry too much about unfairness in the markets.