In simple terms, a stock split is a way in which the management of a company can reduce the price of its shares without reducing the value of the company.

Why Conduct a Stock Split? 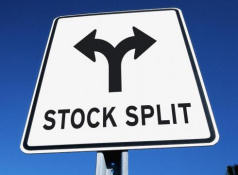 For a number of reasons, a company whose shares are traded on exchange might decide to conduct a stock split. It could be that the shares have seen a very large run-up in price and company management wants to increase the accessibility of its shares to investors.

In some markets, companies are penalized for a lack of volume in the trading of its shares on exchange. By reducing the price of stock, the volume of shares traded will increase (even if the value doesn’t).

Many believe that a stock split will naturally lead to higher comparative share prices, increasing the value of the company. The feeling is that the lower share price, and the extra demand because of the new accessibility of price, will lead to increased demand. However this is a psychological effect that has inconclusive evidence.

How Does a Stock Split Work?

The company increases the number of shares, without raising money (charging for the extra shares). Because no money has been raised, the value of the company remains the same.

This means that the share price will go down.

The extra shares are given to existing shareholders.

A common ratio for such a corporate action is the 2-for-1 stock split, though other often used ratios are 3-for-1 and 3-for-2.

ABC has seen its share price increase over the past year, and it now stands at $100. Shares of other companies in the sector trade at around $40 to $60, and the management of ABC feels it would like to come into line with these other companies for the benefit of attracting small investors. It decides to conduct a 2-for-1 stock split.

John holds 100 shares before the stock split. After the stock split he will own 200 shares, though the value of his shares has not increased, nor decreased. Because the number of shares he holds has doubled, the share price will half.

You can see that although the number of shares has increased, the valuation of individual shareholdings, and the market capitalization of the company itself, will not have altered.

The Effect of a Stock Split on Options

Obviously, the holder of an option contract during a split by the underlying company could be disadvantaged because of the split.

Consider a holder of a call option on 100 shares at $110 in the above example. Clearly, after the split, if his option were to remain unchanged, then it would be worthless (he would need the stock price to increase to $110 from $50 to have value in the option).

So what happens is the contract is either altered to allow for the split. In this example, the number of contracts would double, and the strike-price half. He would now hold call option contracts on 200 shares, with a strike-price of $55.

Sometimes a company will instigate a reverse stock split. This usually happens when the share price has been falling, and perhaps the company is threatened with delisting from the main market because of the share price. It may be that the company wants the shares to look like they have a higher value, even though the company valuation has not changed.

A reverse split works in the opposite way to a stock split.

For example, in a 1-for-2 reverse split a shareholder would have half the number of shares after the reverse split, but those shares would be doubled in price.

It’s not often a good indication of company fortunes if it conducts a reverse stock split.

Finally, when considering stock splits, it’s worth noting that you won’t easily be able to tell if a stock has split on a chart. The chart will allow for the split, and show historical prices adjusted for the split. In the example above, the share price used to draw the chart would be rebased throughout for the 2-for-1 split, and redrawn to $50.