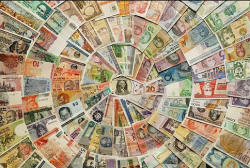 Do you know about foreign currency exchange (forex)? If you’re not too familiar with trading forex, but want to learn to trade forex, this article is for you.

Forex is one of the most exciting means of investing and trading online in today’s market. At virtually any time during the week, you can buy and sell currencies representing economies on every inhabited continent – from American dollars, Brazilian reals, and British pounds to Eurozone euros, Japanese yen, and even Mongolian tugriks.

Each currency essentially competes against other currencies in a zero-sum battle for value. You, as an aspiring forex trader, can learn to navigate the market and profit from changes in value as they happen in real time, all over the world.

Here, we’ll cover trading forex – including the basic terminology, how currencies fluctuate in value, and how you can make money in this field.

First, we’ll start with the fundamentals of forex.

Forex involves currencies essentially competing against one another in terms of value. Like stocks in the stock market, the base unit being traded is a currency – but there’s a difference. You’re not just buying and selling one currency; you’re buying and selling currency pairs.

A pair is a grouping of two currencies. This grouping tells you how valuable one currency is when compared to another. For example, one pair is GBP/JPY. You might see something that says, “GBP/JPY 1.25”. That is a quote, and you read it as follows:

When you make a forex trade, you are buying the base currency in the quote currency. In other words, you’re spending pounds to buy yen. In GBP/JPY, where JPY represents Japanese yen, you’re trying to buy pounds and use yen to pay for them.

What causes pairs to go up and down in price?

There are many factors, but you can group them into three broad categories.

This is probably the most important category. Economic factors drive the value of a currency because the currency is viewed as an expression of the strength of the underlying economy, generally speaking. (There are reasons why you’d intentionally devalue your currency even if your economy is strong; more on that in the next section.)

For example, if the American economy is booming, the dollar will be strong. If the Swiss economy is reporting high export figures, then the Swiss franc (CHF) will rise. Likewise, if the Eurozone reports a rise in unemployment, the euro will probably sink.

Political factors play a big role in currency as well. One of the main effects is when a government or central bank decides to intentionally devalue a currency. The Japanese yen, for example, has been depressed over the past few decades relative to the dollar because Japan is a net exporter of goods. The cheaper the yen is, the more goods countries like the United States can buy. A really high yen is actually damaging to the Japanese economy.

Basically, any decision a government makes that impacts the economy – for purely economic reasons and for reasons that are purely political – fall into this category. This makes trading somewhat complicated, because there isn’t always a rhyme or reason as to why politicians do what they do.

The market is comprised of humans. Humans are prone to illogic, irrationality, and emotion. As such, the market can be driven off emotion and impatience just as much as it can logic and tangible events. Market psychology is important because it helps to sustain trends and drive prices. If perception is one way, it doesn’t so much matter what reality is; perception is what traders will use for their decisions.

Trading forex is essentially betting (not gambling) that one currency will rise or fall relative to another.

So, making money involves figuring out when that will happen – and then being in a good position to profit.

There are several approaches. Some people focus purely on fundamental analysis – i.e. learning about the respective currencies in a particular pair and what factors drive their value, paying attention to news and events, etc. Some people are purely technical – they focus solely on price patterns, momentum, trends, ranges, and indicators.

Some traders are a mix of the two. That is the approach I recommend; you need both sides of the coin to truly understand what’s going on.

Also learn what macroeconomic events trigger certain price movements in your pair. Try to concentrate on only one or two pairs; the more you focus, the better you’ll be at interpreting what a currency plans on doing. Those who trade anything and everything under the sun tend to lose money.

Finally, open a demo account and trade for free. This is great practice and an opportunity to really apply what you’ll learn about forex as you go.