The longer a saver leaves his money untouched, the better the growth in his capital. Interest earned piles up, and itself earns interest. Over many years, the effect of interest earned on interest can be quite dramatic, and leads to a savings phenomenon known as compounding.

This is the principle behind reinvesting dividends rather than taking them as income. Reinvested dividends will buy more shares, which will then attract dividend payments in the future as well as capital growth on the shares (should there be any, of course).

The strategy of dividend reinvestment is one of buying high yielding shares and then reinvesting those dividends to give a compounding effect on returns made.

Investing and taking the dividend

Whilst the final aim of investing in dividend yielding stocks is to produce an income, when there is no need to take the dividend then reinvesting that dividend makes a big difference to final rewards.

For example, let’s consider a stock that pays a 3.5% dividend and let’s assume that the dividend payment remains at that rate of payment through the period of a 20 year investment. Let’s also assume that the annual growth in the capital value of the shares is 5%, again every year for 20 years.

If the dividends are taken, and spent, then the value of the holding would have grown to $26,533 at the end of the investment term. During that term, the dividends received would total $12,152, making a total return of $38,685. That’s a healthy gain, and the investor would have had the benefit of the dividends to spend on whatever he chose.

The effect of reinvesting the dividends

However, if those dividends had been consistently reinvested then the investment growth would have benefited by compounding, and the final investment value would be $51,120. That’s quite some out-performance, but the good news doesn’t stop there.

Let’s consider the income achievable from the investment at the end of the 20 year term.

If dividends had been taken and spent, and assuming the yield remains at 3.5%, then income available at the end of 20 years would be $929. That’s not bad, but not nearly as much as the investor who had reinvested his 20 years dividends, who would receive almost double that amount, at $1789.

The growth of the value of the investment, when dividends are reinvested, grows faster as time moves on. In our example, it will take around 9 years for the investment to add its original amount in value. To do the same again, it takes just 4 years. To quadruple its original value takes a total of only 17 years. Without dividends reinvested, the same level of performance would require more than 28 years. The chart below shows this effect: 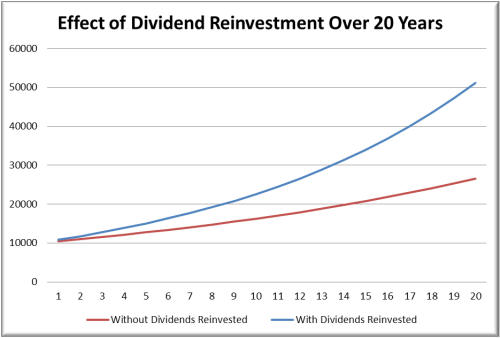 What if the stock price falls?

A falling stock price is actually good news for investors using a dividend reinvestment strategy. As the stock price goes down, if the absolute dividend remains unchanged or increases, then the dividends paid out can buy more shares. The cost of shares purchased is lower, and the number of shares purchased higher. In later years, when stock prices have recovered and dividends are required, the income received will be greater because of the times when the shares were at a lower price.

The effect of tax

Unfortunately for dividend investors, tax is unavoidable. Dividends are first taxed at the corporate level and then again at the individual investor level. Of course, if stocks are held in an IRA, then the personal tax liability will be avoided as dividends can be reinvested tax free.

The figures and charts above do not take into account the effect of taxation, as tax rates change. However, annual dividend income after 20 years would be approximately 8% lower than indicated given a tax rate of 15%.

Time in the market is key

Whereas trading stocks is all about timing of the market, investing with a dividend reinvestment strategy benefits from time in the market. As can be seen from the chart above, the effects of reinvesting of dividends are minimal during the first ten years, but become increasingly pronounced from there on.

For anyone considering investing in dividend stocks, there are four key points to remember in relation to dividend reinvestment: