Corn futures are some of the world’s most popular commodity futures, especially since corn has become one of the two main staple crops in the world (alongside rice).

Corn and products derived from corn, like high-fructose corn syrup, are everywhere. The global economy produced over 817 million tons in 2009, with the bulk of production coming from the United States, China, and Brazil. Production is expected to decrease in the U.S. due to extreme drought conditions in 2012 and could impact prices (more on that later). Rising demand for corn as a food-stock and even a source of fuel (ethanol) has resulted in higher prices for the past decade.

In this article, we’ll talk about corn futures- including how corn futures prices are derived and what key factors need to be considered by traders when talking about corn as a commodity.

All About Corn Futures Contracts

Corn futures are sold on two major exchanges: the IntercontinentalExchange (ICE) and the Chicago Board of Trade (CBOT). The corn futures symbol for ICE is ICN, which stands for Cash Settled U.S. Corn Futures. The symbol for CBOT is ZC for electronic trading (C for floor-traded contracts).

All corn futures contracts on these exchanges are denominated in U.S. currency per bushel of corn, and price fluctuates by a minimum of $0.0025 per bushel (which is $12.50 per contract). Contracts are offered for expiry dates in March, May, July, September, and December. With each contract, you control 5,000 bushels (equal to 70 pounds of non-shelled corn).

The price of corn has enjoyed a gradual rise over the past few years, owing to a variety of factors. One factor is the increasing demand for corn as a food stock. Corn is not only used in its original form; it is increasingly used in virtually every major food product group in the form of high-fructose corn syrup. In the caffeinated beverage industry, for example, HFCS took the place of sugar cane, which was more expensive.

Corn has also been incorporated as a fuel source, predominantly in the United States, Europe, Brazil, and India, among other locations. While pure, 100% ethanol vehicles are rare, gasoline today typically contains some ethanol – anywhere from 5% to as much as 25% in places like Brazil.

Corn historically peaked in price in 1983 and has not yet returned to that level. The low came in the early 2000’s; since then, the price of corn has rebounded nicely, as you can see from this corn futures price chart: 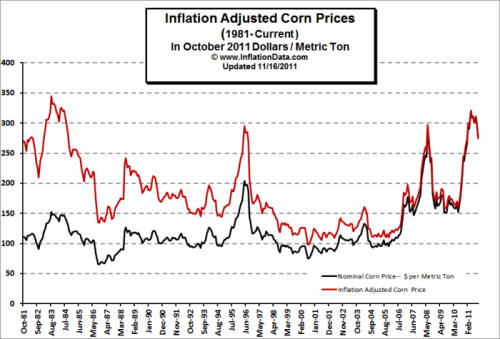 Not all corn is used for food, though. Much of the corn that is traded on CBOT is used to feed livestock and poultry. A rise in demand for these food products has also resulted in a rise in corn prices, especially since cattle and pigs are increasingly fed by corn and corn products.

Another factor in corn prices is the role of the government. Corn is one of the most-heavily subsidized commodities in the United States. As a result, the price of corn has been kept artificially high thanks to a price floor created by a subsidy that fluctuates between $5.5 and 7.5 billion a year. Investors should be mindful of any policy changes that impact this subsidy.

Pay close attention to planting times and monthly crop reports. These reports are issued on the 10th day of each month and usually drive prices. Observing when farmers plant their crops can also give you an indication of how big a crop may be for a particular year. Corn is typically planted in April and May in the Northern Hemisphere; corn that is planted toward the end of May/beginning of June could indicate a smaller crop – which would result in higher prices for corn due to constricted supply.

Corn futures will grow in importance as populations that depend on corn continue to grow. Most think of rice when they think of, say, China, but China is actually the world’s second-largest producer of corn, behind only the United States. Investors looking for “growth” commodity futures have corn as a viable option.