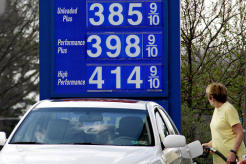 Commodity futures offer investors a way to leverage their accounts for maximum impact – as well as a chance to diversify easily and affordably and take advantage of liquidity. Gasoline futures are some of the most hotly-traded futures in the market; indeed, at times futures values can actually influence the price of gasoline in the market.

Investors purchase gasoline futures to wager on how much they expect the price of gasoline to be at some predetermined time in the future. Since you can control large amounts of a commodity with a relatively small amount of money on margin, you can leverage your portfolio to take advantage of price swings in the commodity without having to actually take delivery of thousands of gallons of gasoline – something that is impractical for everyone other than institutions (such as refiners, airlines, transportation fleets, gasoline retailers, etc.).

Unleaded gasoline futures, historically, have been on the rise. Comparison can be tricky, though, because the format for reporting RBOB prices changed in 2006. This came about because of a change in the composition of the gasoline itself. Gasoline formerly was leaded; then, it became unleaded and began trading on NYMEX in 1984. Starting in October, 2005, though, the new standard became RBOB – which stands for Reformulated Blendstock for Oxygenate Blending.

So, from 2006 onward, prices are given in RBOB and are expressed in terms of dollars and cents per gallon.

The gasoline price chart below gives the futures from June, 2010 through July, 2012: 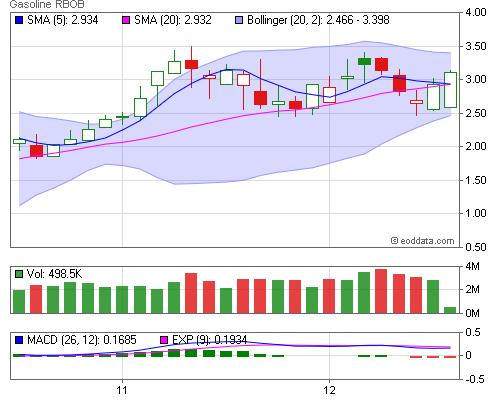 As you can see, over the past two years, prices have steadily risen from a low of around $1.80 per gallon to a peak of $3.50 per gallon in April, 2011 to a slight decline to their current levels. If you go back further, you can see a dip in gasoline futures that coincided with the recession from 2008 to 2010: 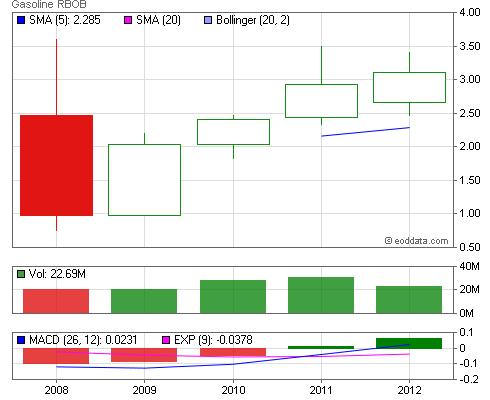 This comparison explains one pricing factor in play with gasoline futures: the state of the economy.

Gasoline futures dropped in 2008 and 2009 because the global economy went into a recession. Consumers had less to spend, primarily because unemployment spiked and business as a whole dropped. Thus, consumers – the primary users of gasoline – drove less. They took vacations and relocated closer to work to create shorter commutes. From a commercial standpoint, distributors had fewer orders to process, so their truck fleets drove less on average.

All of this contributed to a rare global reduction in the consumption of gasoline, which did not regain its footing until 2010. Since then, the global economy in many places has begun a recovery, particularly in the United States, the world’s largest consumer of gasoline. This can be seen in a price chart for gasoline in Nevada:

Expected consumption, then, is probably the biggest single factor in the price of gasoline. The fact that gasoline is a necessary, vital commodity and can’t be replaced on a large scale insulates the commodity a bit from massive price declines; people will always need to drive and products will always need to be shipped, even in a slowdown.

According to the U.S. Energy Information Administration, roughly 68% of gasoline price is determined y the price of crude oil. This percentage has gone up from 2000 to 2010 by 15%; the amount of federal and state taxes that make up the total price has gone down, from 22% to 14%. REfinining costs and profits have also gone down, from 14% to 7%.

One Tip for Trading Gasoline Futures

Pay close attention to supply and demand for crude oil. China has been one of the fastest-growing consumers of oil in the world for the past half-decade. China and other Asian consumers are purchasing as much spare petroleum as possible, which will steadily drive up the price of petroleum barring some unforeseen technological breakthrough or global slowdown.

The supply and demand curves for crude oil play a major role in expected gasoline values – and, as a result, gasoline futures in general.