The sun – the big, hot globe of fire hanging in the sky – is a pretty remarkable piece of nature. Not only does it heat us, provide fuel for plants and, indirectly, every animal in the food chain, and allow us the chance to take the boat out to the lake on the weekend during the summer; it also gives us all the energy we could ever use in a million lifetimes – if we learn how to harness it. 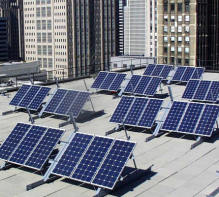 The rapid progression of solar panel technology over the last few decades has attempted to solve precisely that problem. We as a society have progressed from relying 100% on fossil fuels to incorporating a greater percentage of solar power into our unquenchable thirst for energy.

Solar power isn’t close to replacing fossil fuels for heating, cooling, and electricity generation, but it is getting steadily closer with each decade thanks to innovation. With the right investments, you can profit off these technological advancements that will only continue to improve as science begins to catch up with our natural desire for cheap and abundant energy.

You can invest in solar energy by buying stock in energy utility companies that produce electricity from solar power and sell it, but that entails finding the right utilities, researching the companies to find a good investment, and dealing with regulations and other concerns unique to investing in energy companies.

Instead of going that route, one option is to invest in the source of this renewable resource. No, you can’t invest in the sun. But you can invest in solar panel manufacturers.

One easy way to differentiate solar panel makers is by the materials and manufacturing process used. Crystalline silicon is the main bulk raw material used, but there are several ways to turn silicon into cells.

What kind of solar panel manufacturers are there in the market today? Some of the most well-known businesses are:

What influences the price of solar panels – and thereby influences the price of solar panel stock? The main driving factor is demand for alternative energy, which means solar power is competing with hydroelectric, wind, geothermal, biomass, tidal, nuclear, and other types of alternative, renewable energy. The good news, though, is that solar power is the most well-known form of alternative energy, even if its utilization is still low and varies drastically across the globe.

For example, Germany, a country of approximately 80 million people, received just 3% of its electricity from solar in 2011 – even though that was a 60% increase from 2010. In the U.S. in 2010, by contrast, only 0.03% of electricity used (for a population of 311 million) came from solar. The United States is actually fourth among countries who use solar power; Germany is first, followed by Spain and Japan.

Overall, solar power makes up 6.5% of renewable energy in the world, although this figure grew by 83% in 2011. Hydroelectric power is still the main source of renewable electricity (nuclear isn’t considered renewable officially). Solar power, though, is the fastest-growing renewable source by far, and will continue to grow quickly as long as other forms of renewable energy are not as efficient or cost-effective.

Technological limitations also impact solar panel price and solar panel share price. Silicon, the main raw material, has been subjected to supply shortages over the past decade or so, but these issues have largely been resolved. Look to other, non-silicon-based materials to impact solar panel technology. The price per solar panel will probably fall even further thanks to these new materials, which could have a harmful short-term impact on solar panel manufacturers, but in the long run this will make solar power more attractive as it will be more affordable in the long run.