When you’re trading stocks, it’s important to have a basis on which to make your trading decisions. You might know a company inside out, and have a real feel for its prospects in the future, but that level of knowledge won’t tell you what the likely day-to-day, week-to-week price movement will be.

Stocks never move up or down in a straight line, and there is plenty of money to be made short term trends within a longer term trend. The secret to making money from actively trading a stock is spotting these price trends.

Fortunately there are many ways of selecting the stocks to trade, and then the prices at which to buy and sell shares. As an active trader, it’s likely you will rely heavily on technical analysis, looking at charts and price patterns to confirm the levels at which to trade in and out of a stock.

Within this area of technical analysis there are numerous indicators of price movement that traders look to, but one of the most popular is the MACD.

Like most other technical analysis methods, when you use the MACD (which stands for the Moving Average Convergence Divergence) you are examining historical price data and looking for patterns of trend that are repeated. First developed in the 1970’s, it wasn’t until the 1980’s that its use really took off.

And this popularity came about because of the addition of a histogram which makes it one of the most easily read visual indicators available in today’s market.

To be able to use the MACD, you firstly need to know what its three components are, and how they are combined to construct the MACD.

Using a set number of historical days’ price data, you would calculate each day’s moving average in relation to the number of days’ data up to that point and then plot the results on a graph.

If this sounds like too much hard work, or still a little complicated, there’s no need to worry: most trading systems will calculate the ema’s for you, and then create the graph and histogram from which you will note the changing price trend. You can also draw MACD graphs using websites such as Yahoo finance.

The first of these is the short time exponential moving average, known as the faster ema. The most common time period for this ema is 12 days.

The second component is the longer time exponential moving average: the slower ema. The most common time period for this line is 26 days.

The MACD line itself is drawn by calculating the difference between the faster and slower ema’s.

The final component is a shorter term ema of the difference between the faster and the slower ema’s. This is known as the signal, and is most commonly calculated on a nine day period.

Each of the lines on a MACD graph is drawn in different colors.

The MACD line is drawn in blue.

The signal line is drawn in red.

Finally, a histogram of the difference between the MACD and the signal is drawn in the form of a bar chart.

When inputting your time periods to a charting tool to draw a MACD, you input them as (faster, slower, signal). In the example above, this would read as MACD (12, 26, 9). 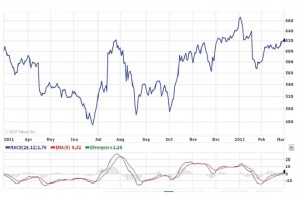 Now all you need to know is how to interpret a MACD. Again, this is fairly easy, though as with anything worthwhile takes a little practice.

The ema’s of the share price show the changing price of an asset over time. The MACD line shows the trend of this price change. So by comparing the two, you can identify shifts in the changing trend, in strength as well as direction.

At the point of crossover, the histogram will always have a value of 0. This histogram narrows toward a crossing point, and so is also a good identifier of the changing trend.

Another indicator of a changing trend on a MACD graph, though not as good as the bullish and bearish crossovers, is when the MACD line crosses zero. A move from the negative to the positive is bullish and vice versa.

Use the MACD intelligently

All technical analysis tools have their limitations. If there was a stock price indicator that was infallible, then everyone would be using it and the market would become defunct. So a good trader, whilst using various technical indicators, will also be aware that, from time to time, they will be wrong. Just like medical tests, the MACD, and other indicators, can give false positives or false negatives.

So it’s important to become familiar with the MACD, and find how it best works for you. Many traders wait for a change of trend to be confirmed after two or three days before acting, and others look at increasing trading volumes or combine with other technical analysis to make trade decisions.

But one thing is for sure: when you are proficient with the MACD it will become part of your everyday routine, and help you make better trading choices.