The Bank of America Merrill Lynch online brokerage offers trade execution for up to 30 trades per month with no commission charges, providing you’ve got a minimum of $25,000 across your Bank of America accounts. For most people that’s a lot to have tied up in one place. Though customer support is reasonable, advanced order type support isn’t.

If you want to place a conditional order, you’ll need to go through one of Merrill’s representatives, and for this you’ll pay a commission of $44.95 (one of the highest in the market and a deal higher than Zecco’s pricing of standard commission plus a fee of $25).

So most traders are pushed toward using the Merrill Edge trading workstation, which is clunky to use and wants to encourage you toward a managed account (with the higher fees), it’s not a surprise that the Barron’s 2012 survey of online brokers put Merrill Edge way down the list.

On the Good Side

The ability to trade free of charge is a boon to traders who trade once or twice a day. Of course this is only available to those that have $25,000 or more deposited in Bank of America accounts, so cynics might see this as either an attempt to retain the business of higher worth clients or encourage stock traders to move their assets to Bank of America.

Over this number of trades, or under the 25k account balance, stock trades are charged at a flat $6.95, about average in today’s market.

As would be expected from such a large bank that consumed one of the world’s largest investment houses, the research available from Merrill Edge is pretty comprehensive. It also boasts a number of tools to help investors, including tables and graphs, calculators and fund screeners.

You’ll also be in line for a free checking account.

Merrill’s retirement accounts compare well to others. It doesn’t levy any custodial fees, and has a zero balance initial funding requirement. However, if transferring funds in or out, a fee of $75 is charged, whereas most brokers will wave such a fee in anticipation of gaining the servicing and other commissions through the lifetime of the account.

The trading screen is functional, but no more. Trading is slow and sometimes dysfunctional, and the lack of support for more advanced orders, such as conditional or contingent orders, means that a greater level of order management is required. This means concentration levels have to be high, which can lead to screen fatigue for the active trader.

Merrill Edge doesn’t offer a virtual trading facility as many of its competitors do. This leaves the active strategy trader at a disadvantage. If he wants to test strategies, then it has to be done on paper, the old fashioned way. Again this takes time and is difficult to run in tandem with the daily trading regime.

It’s possible to retrieve full account details of all accounts held at Bank of America, but many traders prefer to keep these separate.

There have been some technical issues with the service since it was launched, though these seem to have been mostly resolved. However, the level of service received from customer service can be hit and miss, which of course is a problem at many larger companies.

The free of commission trades are calculated as to a complicated formula to measure your account balance. It uses the average balance on a daily basis over the previous month up to the day preceding the trade, and is calculated on a daily basis.

Mutual funds can be traded at Merrill Edge, and if on its list of no transaction fees funds, then you won’t be charged either on the buy or sell side. But outside of this list there is a charge of $39.85 each way. That’s a mile above Zecco’s charge of $14.95. 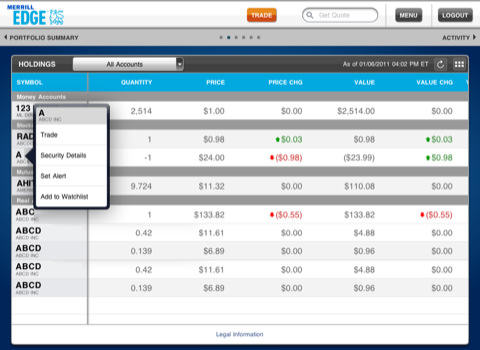 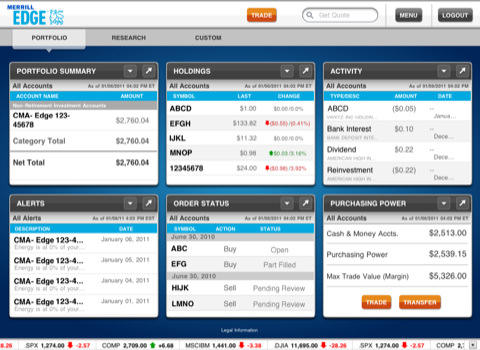 If you want to talk, talk to Merrill

Most online brokerages understand that many of their customers live a lonely existence, and offer a forum or community to interact with other trading members of their platforms. Not so Merrill. As with its entire offering, if you want to talk to someone, then it had better be a Merrill representative, who will probably try to sell you a higher cost service.

Is Merrill Edge for you?

The bottom line is that if you are an active trader, maybe trading on margin, with a deposit balance of less than $25,000 there are better online brokerages. However, if you are an investor that maybe trades with a swing trading strategy, and particlulary if you are an existing Bank of America customer who doesn’t want to exchange trading ideas or converse with others, then Merril Edge gives you a cheap way to trade basic order flow.