You may remember orange juice futures from the 1980’s Eddie Murphy/Dan Aykroyd film Trading Places. They still offer the opportunity to make fortunes – even if they are not what first come to mind when you think of futures.

Orange juice futures provide investors with a way to profit off the price for orange juice, the most popular fruit juice in the market today. One company – Tropicana Products – has a massive 65% market share, and primarily ships reconstituted frozen orange juice from a mixture of American fruit from California and Florida to Brazil, the world’s leader.

Orange juice futures are represented by the ‘OJ’ orange juice futures symbol. This symbol is used in the IntercontinentalExchange (ICE). Contracts are also called FCOJ-A futures contracts. The FCOJ stands for frozen concentrated orange juice. Trading in New York begins at 8:00am and lasts until 2:00pm; in London, trading goes from 1:00pm to 7:00pm; in Singapore, trading is from 8:00pm to 2:00am.

All contracts are priced in U.S. cents and hundredths of a cent (two decimal places) and are available for purchase in January, March, May, July, September, and November.

There are no mini contracts currently listed for orange juice.

Like other agricultural commodities, the main factor impacting the value of orange juice is weather. Demand is always an issue, but historically, demand for orange juice has remained consistently high, so traders are not usually worried about consumers deciding suddenly to stop drinking orange juice.

They are worried, however, about short-term and long-term weather trends that threaten orange juice production. Since most domestic frozen concentrated orange juice is produced in Florida, and Florida is directly in “hurricane alley” (the state receives a hit from a major hurricane roughly once every seven years on average; any given year, Florida has a 48% chance of being hit by a tropical storm or hurricane), weather plays a major role. Whenever bad weather is expected, you can anticipate orange juice futures prices to rise. If the storm misses – or doesn’t do much damage – prices will fall accordingly.

Because of this, orange juice is a sensitive commodity and one prone to speculation. Favorable weather and competition from foreign producers (particularly Brazil, the world’s leading orange producer) can all cause orange juice futures to fall in value, especially when speculators run up the price in anticipation of a particularly-active hurricane season, for example. When nothing comes of it, prices revert back to previous levels.

It can be hard to take a look at historical OJ futures prices, since they are traded monthly. And because of the unique nature of most of the orange juice in the U.S. being produced in hurricane-prone Florida, futures contracts that expire in the middle of the Atlantic hurricane season (from June to the end of November) contain a lot of volatility.

Of course, OJ futures are also seasonal. Valencia oranges, the main source of most orange juice sold today, can be grown from late spring to early winter, or April through December. December to the beginning of April is a non-peak season, and frosts can really impact a season’s crop. For this reason, prices can rise during the winter and early spring, with March being the worst month for frosts in Florida.

Similarly, Brazilian crops are susceptible to drought between May and June, which typically sees higher prices. 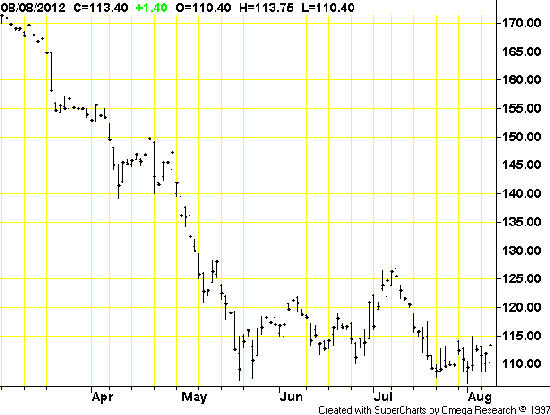 You’ll notice that the prices for orange juice are lower in January than they are in September. What these charts tell you is the price being quoted for an orange juice contract with a delivery date in September, 2012 or January, 2013 throughout the past six months. For example, in August the price for a January 2013 delivery hovered around the $110 mark. For September 2012, it hovered around the same mark, even though it originally started higher.

This shows you how futures prices for orange juice tend to level out as the delivery date approaches. If you were to look at a chart for a September 2013 delivery, you’d see prices being quoted slightly higher, around the $115 mark.

Pay attention to hurricane season and other weather conditions like frosts and droughts- not just in Florida, but in other places like California, Texas, and Brazil. Texas, for example, experienced historic levels of drought in 2011 that harmed all Texas agriculture, not just oranges. Drought is also impacting Florida and hits Brazil on a regular basis.

In fact, long-term climate predictions for higher temperatures and more drought could result in a permanent rise in the price of orange juice – something every serious OJ trader is eyeing.