When you’re considering whether to buy or sell a stock, it would be good to consider what other traders are doing in the market. There’s a saying in the market that is often followed: ‘The trend is your friend’. In other words, if the stock is going up (i.e. more buyers than sellers) then it’s right to buy shares, and similarly if the stock is going down, then it’s right to sell shares. But if this were true, then stock prices would never change direction, and trends never reverse.

This wasn’t the only one of Wilder’s theories on stock pricing and direction: he also developed the Directional Movement Concept, the parabolic SAR, and the Average True Range, amongst others. But it is the Relative Strength Index (RSI) that he is perhaps best remembered for.

Essentially, the Relative Strength Index (RSI) is a momentum based trend indicator, and you can use it to indicate when a stock is about to reverse trend.

The RSI calculation is based upon 14 periods, and calculated using the following formula:

The average gain is calculated by adding the previous average 13 days gains to the current days gain, and then dividing the result by 14. Any losses during the period are discounted.

The average loss is calculated by adding the previous 13 days losses to the current day’s loss, and then dividing the result by 14. Any gains during the period are discounted, and losses are counted as positive numbers.

One thing to note is that the more data points used to calculate the final values, the more accurate the result (eventually, all gains/ losses will be 14 day averages themselves).

If you change the number of days over which the RSI is calculated, then you change the sensitivity of the index. A 10 day RSI is more likely to give an overbought or oversold indicator than a 20 day RSI.

Though an overbought position is considered to be indicated at an RSI value over 70, raising this value to 80 will give fewer overbought indications and increase the accuracy of the RSI.

As with all technical indicators, an overbought or oversold indicator may be followed by higher highs or lower lows, giving the impression of a false negative or false positive. Perhaps it’s wise, when using the RSI, to remember that, for example, though an overbought reading is given at a value of 70, there is plenty of space for the stock to move to an RSI of 100. The reverse, of course, is true of an RSI below 30 and an indication of an oversold position.

As with all technical indicators, other factors need to be taken into consideration. Just as with the MACD, traders using the RSI might wait for the trend reversal to be confirmed.

If you look at the 2 year RSI graph of Microsoft below, you’ll see that on several occasions an RSI of 80 was hit, but the actual high of the stock price didn’t occur for several days. However, when it did the stock moved down for a number of days.

Similarly, when the RSI fell to 20, often the bottom of the stock was not reached for a few days, before the trend was reversed and the share price rose again for a period of time. 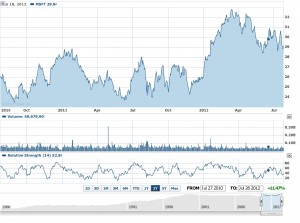 Wilder also said that a divergence of stock price and RSI indicates a turning point in the share price of a stock.

Of course, in bull markets and bear markets it is only right that the RSI range, when levels of an oversold and overbought position would be indicated, might be different.

In a bull market, when the market is trending higher over the longer period, the range of RSI tends to move higher. Oversold positions are indicated around an RSI of 90, whilst support for shares comes in at around an RSI level of 40 to 50.

In a bear market, an oversold position is generally indicated around an RSI of 10, with resistance to further share price increases coming in at around an RSI level of 50 to 60.

All in all, the RSI is a technical indicator that you can use to augment your stock picking and directional trades. It’s great for the swing trader or position trader, but you might consider giving the trend reversal time to be confirmed before trading. You should also be aware of what type of longer term market you are trading in: RSI targets need to be amended for bull and bear markets.