Of the stock market crashes throughout the history of the United States, the stock market crash of 1987 is perhaps one of the more memorable ones if only because it was relatively recent, which means many older investors remember it. The crash of 1929 jump-started the Great Depression, but for many still alive today, Black Monday was a day of fear not just in the U.S., but around the world.

Here, we’ll talk about the crash of 1987 – how it began, what happened, and the aftermath.

Around 1986, though, the American economy began to slow. The fall was gradual and relatively uneventful, leaving many in the economy to believe that a recession would be avoided even though economic expansion decreased from its peak. Unfortunately, this would not be the case.

I’ll point out that 1986 to mid-1987 is a prime example of how an outwardly-strong stock market may not be indicative of the actual health of an economy. The Dow Jones in particular was at a record high, but the underlying economy had weaknesses that would be exposed in the coming months.

At the time, though, many traders believed that the market was on a long-term climb to prosperity, and even took advantage of new computer technology to facilitate heavier, automated trading – one action that contributed to the cause and severity of the crash itself.

The story of the crash really begins at the beginning of October, 1987. At this time, the Dow Jones Industrial Average was at around 2,630, having recovered from a 200-point slide during September. This would be the highest point the Dow Jones would reach until mid-1989.

As a result of the slowing economy, traders began to turn a close eye to two areas: bonds as an alternative to stocks; and the American government’s actions regarding a few notable issues that had emerged in the previous months. For starters, long-term yields for bonds grew from 7.6% at the beginning of 1987 to 10% during the summer, which was an attractive proposition to many investors. Since bonds and stocks mostly operate inversely – when one goes up, the other goes down – traders began to look to bonds as a “safe” alternative to stocks.

Arguably, though, two pieces of government policy announced in mid-October, right before the crash, jump-started the panic that caused the crash to occur. On Wednesday, October 14th, Congress announced that it was attempting to get rid of tax deductions for financing corporate takeovers. The news sent waves through the investment world because investors viewed the act as harmful to business.

At the same time, the Commerce Department announced that the U.S. trade deficit was significantly higher than anticipated, which caused Treasury Secretary James Baker to comment that the dollar should fall – which naturally caused foreign investors to void their positions in the dollar. Interest rates subsequently rose sharply.

These two events occurred roughly at the same time, and fueled a three-day fall of more than 10% in the market. By the close of the week on Friday, October 16th, traders were anxious and began to move funds from stocks to bonds. Friday saw heavy selling, as well as an increased use of futures and options as hedges against the market – actions which placed a tremendous amount of pressure on stocks.

On Monday, October 19th, the market was primed for a spectacular crash. Beginning in Hong Kong and moving westward throughout the day, stock markets across the globe began to crash. In the United States, the Dow Jones fell a staggering 508 points, or 22.61%, which is still the largest, one-day decline by percentage in the history of the Dow Jones.

Below is a chart of the event: 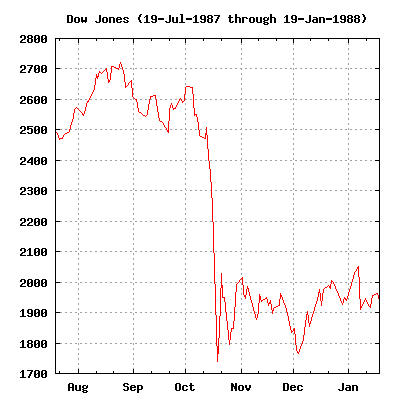 By the end of October, markets were down all over the world (45% in Hong Kong; 26% in the United Kingdom; 22.86% in the United States). Experts began to predict years of trouble and turbulence in the market, a la what happened after the crash of 1929.

Strangely enough, though, the aftermath of the crash of 1987 wasn’t nearly as bad as it could have been (or as bad as people expected it to be). Sure, the Dow Jones didn’t regain what it had lost until 1989, but the market went on a winning streak that lasted, more or less, until the dot com crash in 2000-2001.

What caused the crash, exactly? As with many major economic disruptions, no one is exactly sure. There are plenty of theories. One leading theory is that computer trading became too popular too quickly, which means its effects were not understood very well. Program trading, as it was called, began to take over and automate the stock trading business, which, coupled with investor fears stemming from the government’s intent to remove tax benefits and devalue the dollar, sparked a run on the market that no one really foresaw.

At the end of the day, the crash of 1987 is a testament to how quickly fortunes can turn in the market, and how much of an impact government policy, the dollar, and fear – with a healthy dose of technological mishaps thrown in – can have on the stock market.