Oil futures represent a way oil suppliers can hedge risk in an uncertain market – and a way oil speculators can turn a profit. Either way, they’re exciting and can be quite profitable for investors who know what they’re doing.

The trading of oil futures in the U.S. is an interesting history, one from which present-day investors and traders can learn a good bit. It never hurts to know how a certain practice has evolved, especially one involving such a crucial commodity.

In this article, I’ll cover the history of oil futures trading in the United States and offer a glimpse of where it could go in the future.

The Beginnings of American Futures Markets 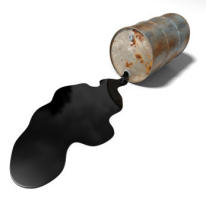 Oil futures have their beginning in futures themselves. The first futures are rumored to have been traded in ancient Greece, and have popped up here and there throughout the centuries (most infamously in Europe during ‘tulip mania’ and the tulip futures bubble of the 17th century).

In the United States, the first futures were sold between 1860 and 1875, with the practice becoming commonplace during the 1880’s. These futures were for commercial agricultural products, like wheat and corn; futures for stock indices, currencies, and a million other assets would come later.

Oil as an industry didn’t really hit its stride as a major American industry until the 1890’s, and it was much, much later until oil futures emerged and became widespread.

Crude oil futures, as we know them, were first sold in New York on March 30, 1983. Before then, players in the industry attempted to control the price of oil, more or less, in the United States. The price of oil didn’t really get out of hand until the Yom Kippur War in 1973 and the ensuing embargo from the Organization of Petroleum Exporting Countries (OPEC), the Middle Eastern oil cartel that sought to punish Israel and its supporters in the West. Prices dipped from 1975 to about 1978 before spiking again with the overthrow of the Shah in Iran in 1979, the beginning of the Iran-Iraq War, and the rise of Ayatollah Khomeini.

Prices took a tumble from 1983 onward. At this time, the first futures contracts were traded on the New York Mercantile Exchange (NYMEX). These oil contracts were based on the West Texas Intermediate (WTI) price benchmark, as they are today. Partially because of this development, oil prices continued to fall until they bottomed in 1988. They would not significantly rise again until forced to do so by the invasion of Kuwait by Iraq in 1990.

Impact of Futures on Price

What impact, if any, has the emergence of oil futures had on the price of oil?

It is reasonable to state that the emergence of oil futures has had a stabilizing effect, more or less, on the price of oil. While it’s true that oil has skyrocketed since the late 1980’s, it is also true that the world has grown significantly – which means increased consumption – and supply has struggled to keep up. So it’s easy to see how natural limitations on supply and increased demand can explain most of the rise in price of oil.

When looking at the situation from that perspective, the presence of oil futures has allowed oil suppliers to hedge against the market and to protect themselves somewhat from volatility.

The Future of the Oil Market

While no one can predict the future of the oil market with 100% accuracy, there are a few possible and probable trends involving oil futures.

For starters, technology hasn’t yet advanced to the point where we can replace petroleum. Oil is still the main source for transportation fuel by far. It is virtually irreplaceable when it comes to petrochemicals (although biological feedstocks are promising for replacing petroleum in certain plastics). And supply has not managed to match demand step for step – especially considering demand for oil is projected to grow by 20% by 2030, mostly due to increased consumption in the transportation sector.

For this reason, it is thought that oil futures in the long run will be in almost-permanent backwardation. In other words, the price of a futures contract will be lower than the expected spot price down the road. Naturally, this may not always be the case with three-month futures, but for nine-year futures, that is almost a certainty.

The permanence of supply and demand limitations with oil could mean that futures gradually lose liquidity with each year, at least for longer contracts. This is because fewer traders will be willing to bet that the price of oil will significantly decline that far down the road – so they will be less willing to buy contracts.

Of course, all of this is conjecture. With the nature of technology as it stands today, though, oil is here to stay – which means prices will only rise in the future.